If you need inspiration, visit Francis. He is the embodiment of courage, love, and strength. Francis is always singing, dancing, and radiating happiness. The following is a condensed version of his story. 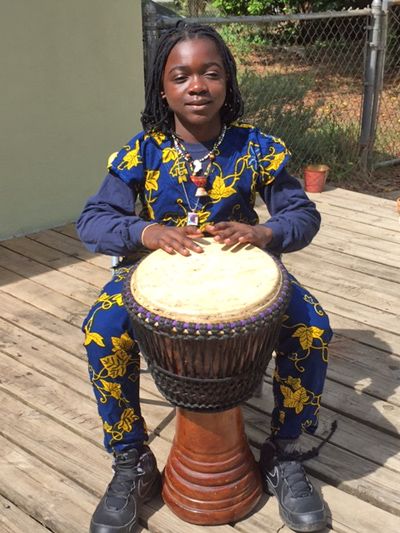 Francis is a 13-year-old child from the rural village of Okurase, Ghana. He has been suffering loss of vision since an early age. He is the only member of his family with vision loss. He has never been able to attend school in Okurase because he could not see the chalk board and there were no basic services to accommodate his low vision. He found solace in directing his energy into drumming, where he studied under his mentor, Dr. Samuel “Powerful” Yeboah aiming to become a Master African Drummer. Francis is a talented drummer. As a Master Drummer in training, he is sharing his African rhythms with everyone he meets and doing all he can to help people through his talent. He and his family and community have long hoped for a solution for his vision loss and education.

The First Step Toward a Brighter Future 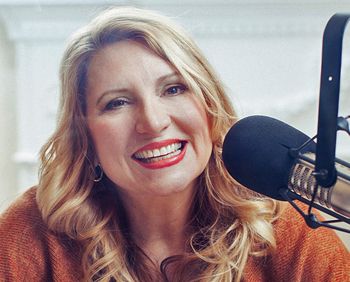 They left Okurase determined to bring Francis to the United States to pursue evaluation and treatment for this progressive vision loss. They worked with Project OKURASE to raise the funds to make this happen. But getting a VISA to the United States was not easy. Due to the generosity of Delilah, radio talk show host and founder of Point Hope in Ghana, an immigration attorney helped see it through. As a united link with Project OKURASE, the goal came to fruition. 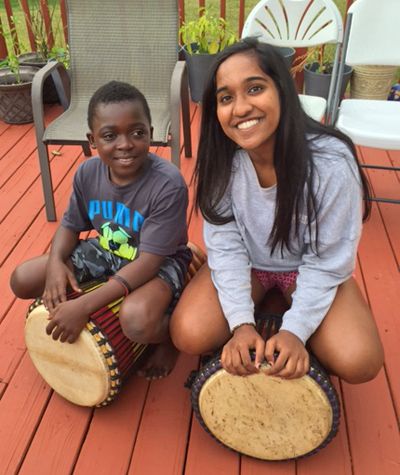 In July 2015, Francis took his first trip away from his village and toward finding a solution for his vision loss and lack of education. He flew 5400 Miles to Charleston, SC and stayed with Dr. Cynthia Swenson’s (Project OKURASE Co-Founder) family. Charleston's Mayor Joe Riley and South Carolina Senator, Lindsay Graham, were instrumental in communicating with the U.S. Embassy in Accra to attain a Visa for Francis. We can't thank them enough.

Medical Assistance in the USA

Anne Griffith, a teacher at the Miami Valley School worked with Dayton Children’s Hospital to apply for Francis to be considered a humanitarian case. The hospital approved the application that allowed Francis to be evaluated and treated for progressive vision loss pro bono. 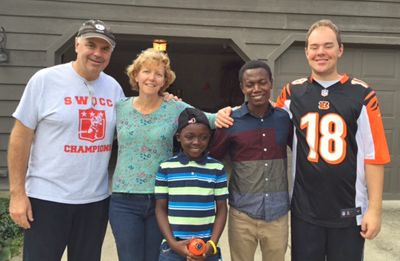 Anne also worked with a local ophthalmologist and dentist for Francis to receive this additional care in Dayton pro bono. Three trips were made from Charleston to Ohio to carry out the medical and dental appointments. Dr. Swenson drove Francis to Ohio and stayed with families in Dayton.

The purpose of the comprehensive evaluation was to address overall health factors that might be affecting his vision and to address his low overall growth. We also were seeking an understanding of his vision loss through proper diagnosis. 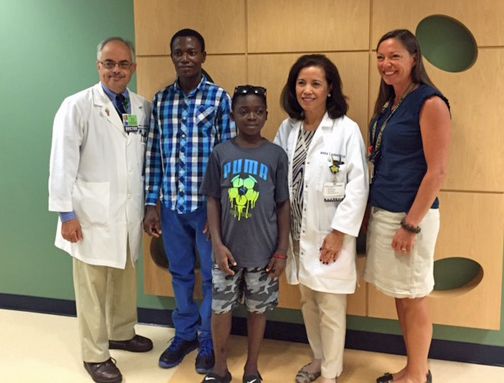 Francis was diagnosised with retinitis pigmentosa but some of his characteristics were atypical of retinitis pigmentosa. Therefore, he was referred to the Cleveland Clinic for additional evaluation and to consider contextual possibilities such as river blindness. Francis was evaluated by an ophthalmologist, Dr. Traboulsi, at the Cole Eye Institute of the Cleveland Clinic. Significantly, Francis was diagnosed with Leber Congenital Amaurosis (LCA; a genetic disorder). Dr. Traboulsi said that Francis may or may not experience total blindness but needed to prepare for the possibility. Francis gave saliva and blood samples for genetic testing. 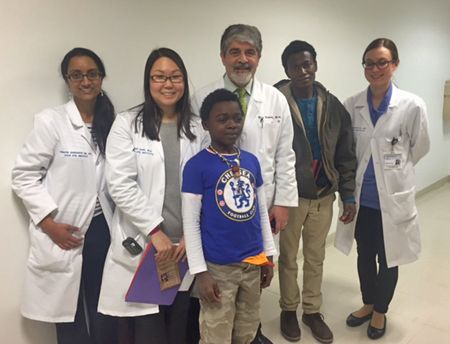 As well as providing a current vision evaluation, Dr. Gary Busch worked with Francis on low vision aids that would allow Francis to receive an education. Dr. Busch provided some of these aids to Francis. These aids have allowed Francis to go to school.

Education in the USA

Dr. Swenson's daughter attended Sundrops Montessori in the Charleston area. The school offered to have Francis attend with a tuition waiver. Francis had never been in school due to his low vision. During his U.S. stay, Francis completed the entire school year at Sundrops Montessori. 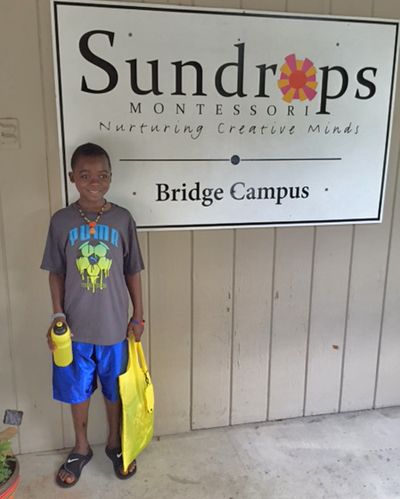 Bob Cook from Enhanced Vision came to Sundrops Montessori to show us machines that can be used by people with visual impairments to help them learn. Francis was shown an Acrobat and a Pebble. The Acrobat LCD is a machine with a large base and camera that provides magnification for near, intermediate and distance viewing. Francis can magnify writing on the wall or in a book and change the background and letter colors. We learned that Francis sees best with a black background and white letters. He responds well to contrasting colors.  The Pebble is a small handheld battery operated machine that serves the same function of the Acrobat but is more portable. Francis used the Acrobat at home and the Pebble at school. He also found that use of a small whiteboard and dry erase markers was helpful as a teaching tool. 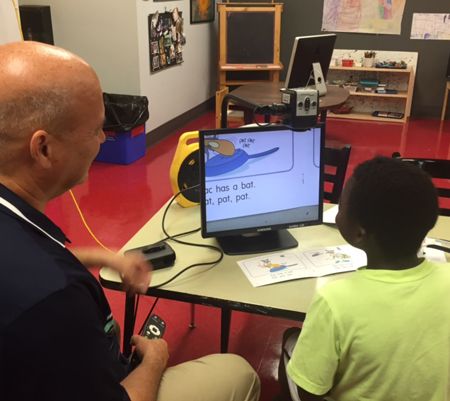 In addition to learning the music and technique associated with capoeira at Sundrops Montessori, Francis participated in 5 weeks of guitar lessons with Terry Ryan at Hungry Monk Music in Charleston.

Francis began mobility training with Terry Smeltzer of Charleston. Through 5 sessions with Ms. Smeltzer, Francis learned techniques to help others be a sighted guide for him and safety techniques. He also learned use of a walking stick (i.e., cane) mainly for outside walking.  He rehearsed all skills to mastery. Ms. Smeltzer helped us purchase canes at a reduced rate for Francis to own and use. 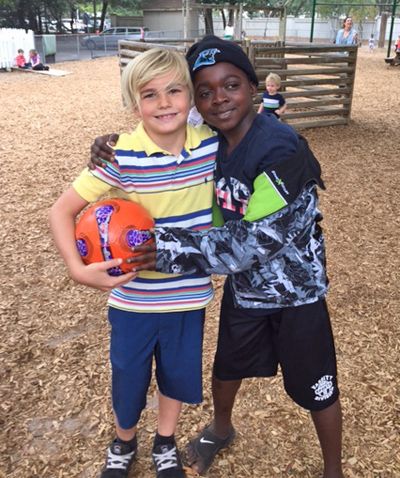 In addition, Ms. Smeltzer referred Francis to Association for the Blind and Visually Impaired in Charleston to learn further educational techniques. Two trainers, Amy and Kimberly worked with Francis to learn to use computer assisted technology such as voiceover on an ipad with Bluetooth keyboard. He also learned to use several applications for visually impaired on his MacBook and he learned to use an iphone to communicate and help with transport and identification of objects. The trainers at the Association for the Blind and Visually Impaired guided us to see that Francis’ interest in computers and technology should be capitalized on for his education. Further, they indicated that because he is a professional drummer and has callouses on his hands, learning to read by touch (i.e., braille) might not be the best learning modality for him.

On July 7, 2016, Francis traveled with Dr. Swenson back to Ghana. Francis will remain in his home village until the next steps with gene therapy are determined. 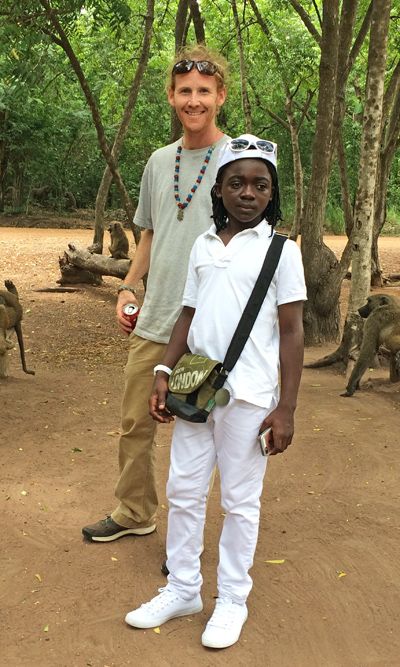 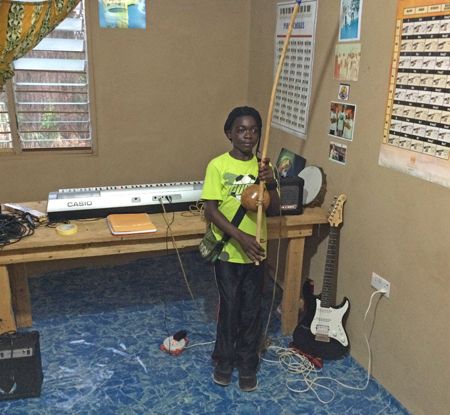 Nonetheless, several steps were taken to help Francis continue to move forward on education, music, and health in Okurase with funds that where raised by Sundrops Montessori:

Learning From Each Other

As a master African drummer, Francis performed for the community and the school he attended and taught other children African drumming. 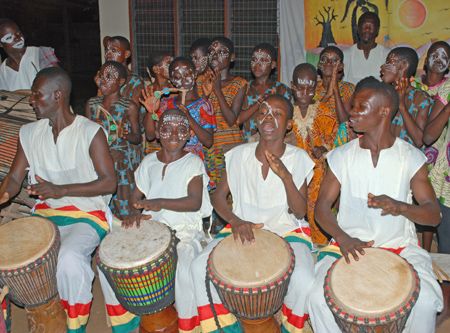 Owu, his guardian, offered classes in the Twi language at the school Francis attended as an opportunity for the children there to learn Ghanaian culture. When Francis no longer needed Owu at school, Owu began to volunteer at the Medical University of South Carolina organic urban farm to attain skills to bring back to his village. Both Francis and Owu received a lot from the Charleston, SC and Dayton, Ohio communities and the communities learned alot from Francis and Owu.

Over the past 5 years we have worked diligently in Ghana and in the United States to attain proper diagnosis and intervention for Francis Yevuga. 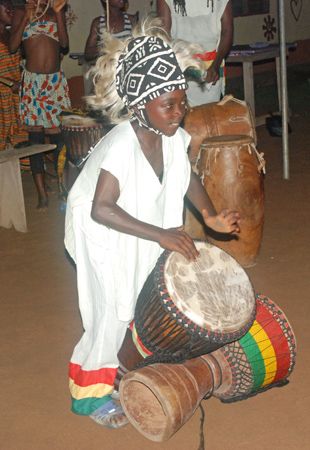 This work included one year of consistent efforts in the United States to improve Francis’ health, start him on education, and attain state-of-the art diagnostic and intervention services with regard to his vision loss. We met all our goals that could be met. He is now equipped to proceed with his education.

Follow up will occur as we keep in touch with Francis and monitor his progress. We will stay in contact with the doctors. Our hope is for Francis to participate in a clinical trial or approved clinical gene therapy treatment for LCA. We will continue our quest to bring vision to this child.