The purpose of Mikey's Fish Farm is to provide a self-sustaining source of income, protein, and skills training in Okurase. 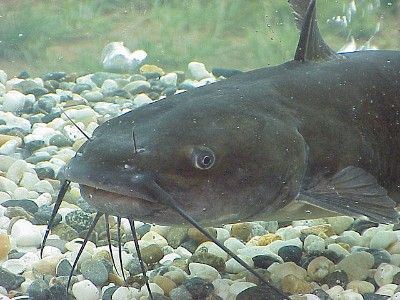 Ghana does not produce enough fish for its people.

Ghana is a lower middle income country ($1,026 - $4,035 GNI per capita). Agriculture is its largest economic sector and employs the largest number of people, mostly smallholder farmers that produce food for the family and some cash crops.  Food production, however, is seasonal and dependent on rainfall which creates food insecurity (Dafur and Rosentrater, 2016).

At present, Ghanaians get the majority (60 percent) of their protein from fish as it is a very popular ingredient in many Ghanaian dishes and soups; it is also one of the least expensive sources of protein. Its popularity is also driven by the fact that it is one of the most widely accepted proteins across religion, social and ethnic lines (Smallstakes, 2018). 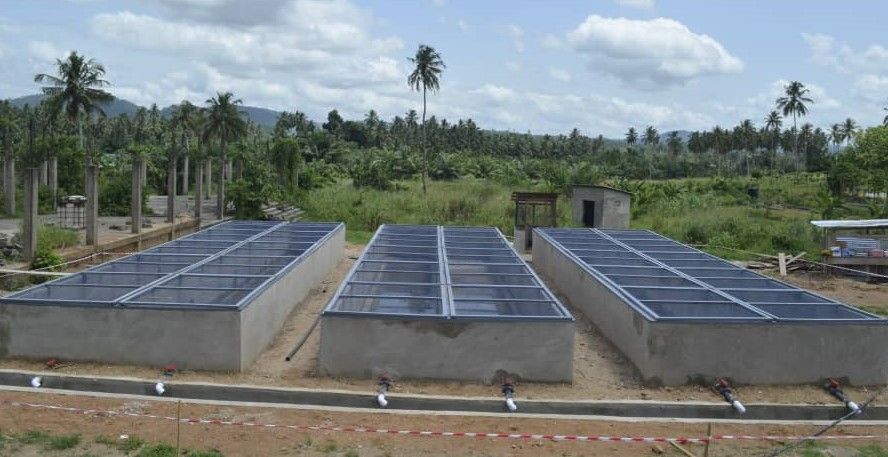 The current consumer demand for fish in Ghana is 1 million tons per year, however, the country only produces 440,000 metric tons annually (Okai, 2017) due to significant declines in fish catches in both rivers and oceans caused by environmental degradation (ECOWAS, 2015). Consequently, Ghana must import the majority of its fish. This is despite the fact that Ghana has the ideal climate and an underemployed, inexpensive, and hard working labor force  (ECOWAS, 2015). 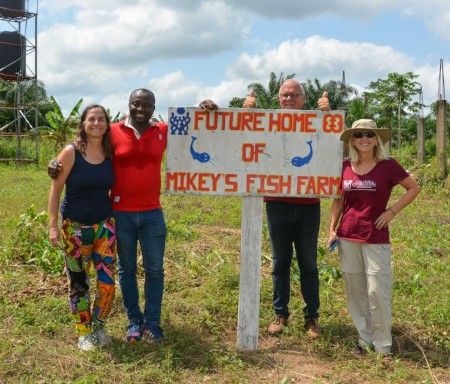 Given Ghana's fish deficit, the Ministry of Agriculture has announced it wants to increase domestic fish production over 100% to 1 million tons per year.

Although Ghana has the ideal climate to farm fish, there a proportionally fewer fish farmers than elsewhere in the world. The government is working on educational initiatives to support small fish farmers. Project OKURASE believes it is a good time to invest in fish farming in Okurase. 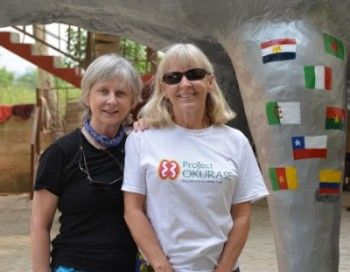 Project OKURASE is interested in exploring fish farming as a way to provide a local source of protein and income as well as a training program to help more Ghanaians become economically secure. In early 2017, two College of Charleston professors, Dr. Rene Mueller and Dr. Linda Plunkett, began interviewing Okurase women-owned micro-enterprises to understand their current needs as well as identify new opportunities that will not disrupt or cannibalize current businesses. They confirmed fish farming as a business to explore. 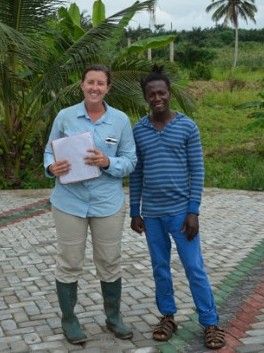 In the summer of 2017, locals and a Medical University of South Carolina student, Kaylan Gee, conducted initial research on the placement and type of fish farm for Project OKURASE to consider. We had initially considered growing tilapia in an earthen pond.

Then in May 2018, students from the College of Charleston’s (CofC) School of Business traveled to Okurase to study the financial feasibility of a fish farm and to begin construction of a prototype pond.  Prior to arriving in Okurase, they did extensive research on fish farming in Africa. When they arrived in Ghana, Project OKURASE and the CofC team met with an expert from Ghana's Aquaculture, Fish Genetics and Fisheries Management Department on-site in Okurase, visited professors from the University of Cape Coast’s Department of Coastal Management, and spoke with many other fish farm experts. 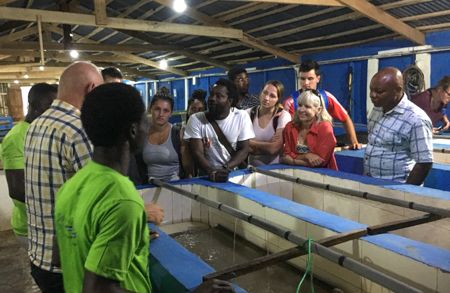 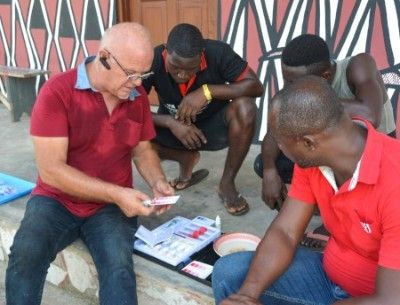 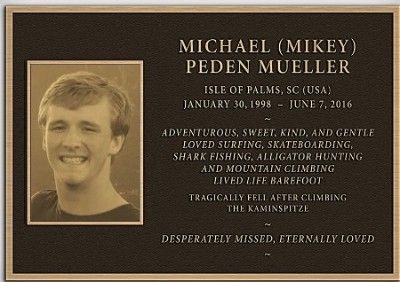 They also visited Ainoo-Ansah, a fish nursery, out-grower, and fish farm trainer/consultant and Mr. Gerrit Valkenburg of Cluster Farms Holding, an NGO that helps Ghanaians establish ‘grow-out’ fish farms. After they completed their research, the recommendation was for Project OKURASE to move forward with a farm of six raised, concrete ponds growing catfish as a "grow-out" farm for Cluster Farms Holding. The CofC recommendation included a conservative 10 year financial plan showing the financial viability of the fish farm.

Mikey's Fish Farm will be located at Nkabom Centre in Okurase. It is named for Mikey Mueller, an adventurous, kind, and gentle 18 year old young man who loved the outdoors and fishing and tragically fell after climbing the Kaminspitze in Austria and left us too early. 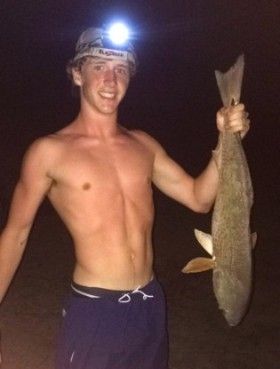 Being part of the Cluster Farms Holding "grow-out" team, allows Project OKURASE to reduce its risk by working with Cluster Farms Holding who brings fish farming knowledge and experience, quality fish feed, quality juveniles, and a ready market for our grown fish. We will also be contracting through them for the farm construction.

Project OKURASE will be purchasing its fish food and juveniles from Cluster Farms Holding as well as selling fish back to them as part of their grow-out team. 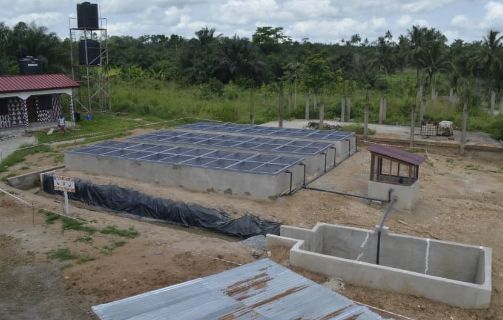 The funds have been raised for the construction phase of the project thanks to Possibilities Without Borders and other generous donors. We want to thank everyone who has given so much to move this program forward!

Now, Mikey's Fish Farm construction is complete! Thanks to generous donors, we begin initial operations of Pond 1 with 3600 catfish in August 2019. This will allow us to learn as we raise funds for full operations of all six ponds. 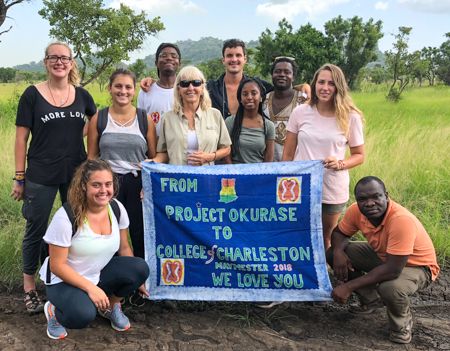 There are several reasons why a fish farm is a good social enterprise. Fish farming not only grows the national fisheries industry, it contributes to the reduction of unemployment and promotes economic growth. Well-managed fish farms directly affect the creation of jobs and the reduction of poverty as well as food insecurity. A fish farm, even a small one, employs several workers. This is significant as the average household size in Okurase is approximately 9 people (Mueller and Plunkett, 2018); consequently, four employed workers can help economically support 36 people and help lift them out of poverty.  Fish farming is not seasonal and it is not dependent on rainfall so it is less risky.  If the fish farm is owned by an NGO, the profits can be plowed back into the fish farm for expansion and into the community in the support of other social programs.  Having a local source of fish also alleviates the time and expense required to travel to secure fish sold and consumed in the Okurase community by fresh fish sellers.  This is important as women (primary vendors and processors) must work 12 hour work day, six days a week to make ends meet.  Time spent traveling takes away from income generating work. Currently, there are no fish farmers in Okurase.

Project OKURASE is excited to be working with Dr. Rene Dentiste Mueller, Dr. James Malm, and students from the College of Charleston in South Carolina along with Gerrit and Maurice Valkenburg of Cluster Farm Holding in Ghana on the development of Mikey’s Fish Farm in Okurase, Ghana. It will provide a new source of income and local protein in Okurase. We will be raising catfish in six ponds. Once we are fully up and running, we will be harvesting at least 3000 kg of fish every month. Mikey's Fish Farm construction is complete! Thanks to generous donors, we begin initial operations of Pond 1 with 3600 catfish in August 2019. This will allow us to learn as we raise funds for full operations of all six ponds. Please donate and help us achieve our goal of a self-sustaining fish farm by the end of the first full year of operation.

Project OKURASE is currently raising funds for first year operation costs to help us achieve our goal of a self-sustaining fish farm by the end of the first full year of operation.