“Project OKURASE” is a 501 c 3 nonprofit in the United States and an NGO based in the rural village of Okurase, in the Upper West Akyem District of the eastern region of Ghana, West Africa. The mission of Project OKURASE is:

While honoring Ghanaian arts and culture, collaborate with the village of Okurase, Ghana to develop sustainable, replicable solutions to life’s biggest challenges and share lessons learned with other disadvantaged villages.

Project OKURASE started long before the NGO or nonprofit were formed. It started with independent work being done in Ghana and America. 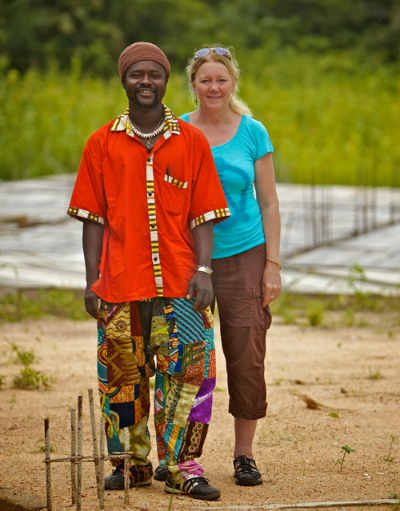 In 1998 in Ghana, Samuel Nkrumah Yeboah (called Powerful in Ghana) a drum maker, master drummer, and performing artist had started an NGO called Nkabom Artiste and Craftspeople Association. Nkabom was conducting work with street children through the arts. Samuel was teaching and making drums. He was buying drum shells from a village called Okurase in the eastern region. He saw the great need in Okurase and had in mind to help the village and to then reach out to many villages with what was learned. The leaders in Okurase had ideas on how to change their plight but the resources to do so did not exist. Samuel received a contact and a drum order from Dr. Cynthia Cupit Swenson and Ida Taylor with Djole African Dance and Drum Company in Charleston, South Carolina.

In 1998, through a Medical University of South Carolina (MUSC) Healthy South Carolina Initiative, Dr. Cynthia Cupit Swenson of the Division of Global and Community Health of MUSC joined with Ida Taylor of the Union Heights neighborhood and Gethsemani Community Center to carry out a community violence prevention project called Neighborhood Solutions in a high crime neighborhood. Over the next three years the Union Heights neighborhood experienced dramatic reductions in substance abuse and criminal activity and increases in school attendance among youth and families who participated in the Neighborhood Project and an 80% reduction in calls for police service. The community started a nonprofit (501c3 called Gethsemani Circle of Friends – named for the local community center) to sustain their activities. During the Neighborhood Project, the community desired positive activities that resonated with their culture and began lessons in West African dance and drumming for children. The children rapidly learned the dances and showed talent. The dancing and drumming are part of their cultural heritage. Sullivan’s Island, just across the water from Charleston was the site of the landing of slave ships from West Africa. People who were enslaved in Ghana were brought to Charleston and their culture added richly to the current fabric of the city and the region. The children’s group called Djole, needed authentic, professional drums. Todd Chas of the Coastal Community Foundation introduced the group to Samuel Nkrumah Yeboah, a drum maker and performing artist in Ghana. A drum order was placed. The drums traveled from Ghana to Charleston, South Carolina.

Check out his video by Adam Parker of the Charleston Post and Courier:

Through drums the link was made. Samuel invited Djole to come to Ghana. In July 2006 a group of 21 children who had never even been to the Charleston airport flew to Ghana and spent 18 days working with Samuel and Nkabom Artiste and Craftspeople Association to disseminate information about HIV/AIDS through dance/dramas that were conducted in many cities in Ghana. Samuel took the group to a village called Okurase. The Djole children were struck with the needs of their same age peers who were much smaller due to malnutrition and they wanted to help.

In 2007 Project OKURASE officially began as a partnership of the village of Okurase, Nkabom Artiste and Craftspeople Association, Gethsemani Circle of Friends nonprofit in Charleston, the Medical University of South Carolina, and Project OKURASE NGO in Ghana. This link continues to be multidirectional  – helping people in America, Ghana, and many other countries.